Australia's bid to have areas of the east Antarctic region — together larger than the state of New South Wales — declared a marine sanctuary has again been dashed.

Delegates from 26 country members of the Commission for the Conservation of Antarctic Marine Living Resources (CCAMLR) failed to reach a consensus on the proposal at a meeting in Hobart this week.

It was hoped declaring a million square kilometres of the region as a marine protected zone would protect its biodiversity, and help manage the impacts of climate change.

All CCAMLR members have to back a proposal at the conference for a motion to pass, and the aim this year was to win over China and Russia, who had voted against it in the past.

China and Russia again failed to back the proposal.

The Commission for the Conservation of Antarctic Marine Living Resources (CCAMLR) has committed to establishing a representative system of marine protected areas (MPAs) in the Southern Ocean. CCAMLR has two existing MPAs, one on the South Orkney Islands southern shelf (established in 2009), and the other in the Ross Sea region (established in 2016).

Australia and the European Union are proposing an East Antarctic Marine Protected Area to contribute to a representative system of Antarctic MPAs.

The proposed East Antarctic MPA would conserve examples of biodiversity in the high latitudes of the Indian sector of the Southern Ocean. The area contains distinctive deep water flora and fauna and supports important ecosystem roles, such as feeding areas for marine mammals, penguins and other seabirds. The proposed MPA would also provide scientific reference zones to assist with understanding the effects of fishing outside the MPAs as well as the consequences of climate change on Antarctic and Southern Ocean ecosystems.

There are many different biogeographic regions in the Southern Ocean and MPAs will play a significant role in conserving representative areas of each.

The East Antarctic MPA proposal includes a MPA Management Plan and identifies priorities for a Research and Monitoring Plan.

Key features of the MPA

The East Antarctic MPA proposal was developed in 2010 using the principles of comprehensiveness, adequacy and representativeness and has been endorsed and confirmed by CCAMLR's Scientific Committee on three occasions as containing the best scientific evidence available.

Objectives of the proposed MPAs

The MacRobertson area is representative of highly productive coastal and oceanic food webs in the West Kerguelen Sub-province, where marine mammals and birds forage during the summer. This area also includes a diverse set of seafloor ecosystems on the shelf, slope and seamounts representing the Central Indian Province. The size of the area has been determined by Adélie penguin foraging requirements, particularly during the critical breeding period. It also encompasses the foraging area of local Emperor penguin colonies.

The Drygalski area is important for its diverse sea floor environment on the shelf and slope, particularly in relation to canyons and ice shelves. It is representative of the coastal food web adjacent to the ice shelves and the greater oceanic food web adjacent to the Greater Kerguelen Plateau within the East Kerguelan Sub-province. This is the only representation of this type of food web in the proposed MPA. It also includes important foraging areas for Adélie and Emperor penguins, marine mammals and other seabirds.

The D’Urville Sea-Mertz area is an important area for our understanding of climate change, as a site of Antarctic Bottom Water formation, which drives global ocean circulation and traps greenhouse gases. Due to this process, the area supports a range of habitats not found anywhere else. Its seafloor values include a diverse set of habitats on the shelf and slope, particularly in relation to canyons, ice shelves and the Mertz Polynya. It also provides representative examples of other values within the Wilkes Sub-province, including coastal and oceanic food webs, a nursery area for Antarctic silverfish, and the foraging ranges of marine mammals and birds, such as Adélie and Emperor penguins. This area also has registered CCAMLR vulnerable marine ecosystems.

The area contains sites of long term monitoring of marine mammals, seabirds and the formation of Antarctic Bottom Water, as well as areas important for understanding climate change impacts on Southern Ocean ecosystems and processes without interference. The size of the MPA is determined by the important summer foraging requirements of marine mammals, Adélie and Emperor penguins, and other seabirds during critical breeding periods and by its value for monitoring large scale ecosystem processes.

A multiple use MPA

The proposal allows for multiple uses within the MPA. This means that activities, including fishing, will be allowed to take place so long as such activities will not adversely impact on the objectives of the MPA.

The proposal extends an existing prohibition on exploratory fishing in depths less than 550m to include all areas landward of the outer 550m bathymetric contour, including areas that are deeper than 550m in innershelf depressions and embayments. This seeks to conserve areas considered to be key continental shelf ecosystems.

A prohibition on fishing for krill in the D'Urville Sea-Mertz area is proposed to monitor important environmental changes in this area since 2010.

Why are talks over an East Antarctic marine park still deadlocked? (2 Nov 2017) The Conversation

According to plans first proposed to CCAMLR in 2012 by Australia, France and the EU, the East Antarctic marine park was designed as a representative system of seven marine protected areas, covering 1.8 million square km that would capture key ecosystem processes.

By 2017 the seven zones had been scaled back to three, covering just under 1 million square km – largely to accommodate some member states’ economic interests and political concerns.

Coming into 2017, proponents had worked to strengthen the East Antarctic MPA proposal, achieving the support of all states except Russia and China.

This obstruction is not novel. These two states have been the most vocal opponents of MPAs throughout the history of the negotiations, citing a variety of concerns including fishing interests, sufficiency of science, conservation need, and political accusations. 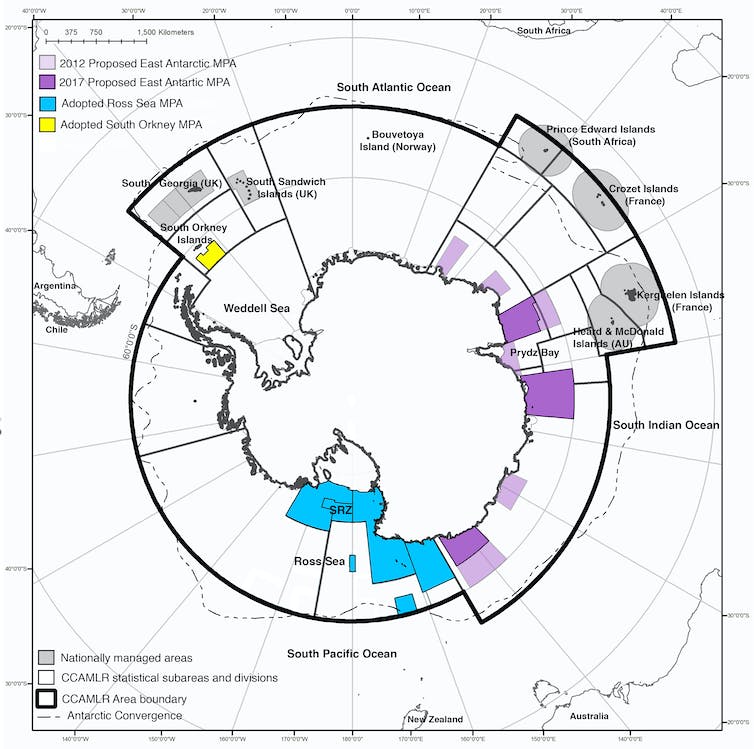