On January 1, 2020, the Palau National Marine Sanctuary (PNMS) went into effect, closing 80% of Palau’s Exclusive Economic Zone (EEZ) to all forms of extractive activities including all types of fishing. Referred to in Palauan as Euotelel a Klingil a Debel Belau, the PNMS is among the world’s biggest marine protected areas.  The remaining 20% of Palau’s EEZ is designated as a Domestic Fishing Zone (DFZ) that will support food security and bringing more economic benefits to the people of Palau.

The Palau International Coral Reef Center (PICRC), with the passage of Republic of Palau Public Law (RPPL) 10-35, was mandated with the administration of PNMS and coordination of research, outreach and education activities. PICRC is committed to working towards the successful administration of the PNMS, for the benefit of current and future generations of Palau.

The Palau International Coral Reef Center, in January 2019, began a working partnership with the Stanford Center for Ocean Solutions to provide essential data and information on the current state of affairs for the PNMS, and the latest relevant research in the fields of fisheries, socio-economics, and ecology. A report, entitled “Palau’s National Marine Sanctuary: Managing Ocean Change and Supporting Food Security; Report of an Expert Working Group Convened by PICRC and COS,” was published in December 2019. It is accessible below, along with an executive summary, appendices, and the PNMS Science Plan.

Interested individuals may also read about the report and the working group on the Stanford Center for Ocean Solutions website here.

Updates on the PNMS

Since January 1, 2020, work on the Palau National Marine Sanctuary for its successful implementation continues. See news articles and press releases below which document the progress.

January 1, 2020:  PNMS Act enters into full force with the start of a new decade

Proposed amendments to the Palau National Marine Sanctuary Act (PNMS) to lift the export ban on pelagic fish and create a corridor to the high seas as the new boundary for the 20 percent Domestic Fishing Zone (DFZ) will be signed into law today (June 12).

The bill seeks to allow commercial exports of fish within the DFZ for its economic “vital revenue” from foreign fishing license fees and for Palau to also earn revenue from fish caught inside and exported from the domestic fishing zone.

It will also allow fish caught with long-line fishing to be exported commercially. In the current PNMS law, the DFZ only allows exports of fish caught by free school purse-seining.

The amendments also redefined the new boundaries of the domestic fishing zone have been reoriented splitting the adjacent 80% of the PNMS and allowing a corridor extending into the high seas.

The high seas corridor, the lawmakers said will allow local fishermen to have access to the fish.

The corridor – boundaries start at 24-miles from the baseline where the exclusive economic zone is measured and encircles Ngeruangel, Kayangel, Babeldaob, Koror, Peleliu, Angaur and stretches outward from points to the north of Ngeruangel and the south of Angaur into the high seas in the west.

Senate Bill No. 10-157, SD1 has been transmitted to the House of Delegates after the Senate approval on June 3.

Expedited approval by the House of Delegates, and hence OEK passage, is expected as the amendments were the result of consultations between the president’s office and both OEK houses.

The lawmakers are seeking to allow commercial exports of fish within the DFZ for its economic “vital revenue” from foreign fishing license fees and for Palau to also earn revenue from fish caught inside and exported from the domestic fishing zone.

It will allow fish caught with long-line fishing to be exported commercially. Currently, the domestic fishing zone allows exports only on free school purse-seining.

The new boundaries of the domestic fishing zone have been reoriented splitting the contiguous 80% of the PNMS no-take zone and allowing a corridor extending into the high seas. The corridor – boundaries start at 24-miles from the baseline where the exclusive economic zone is measured and encircles Ngeruangel, Kayangel, Babeldaob, Koror, Peleliu, Angaur and stretches outward from points to the north of Ngeruangel and the south of Angaur into the high seas in the west.

The 80 percent of Palau’s exclusive economic zone (EEZ) will still be a no-take zone but the designated domestic fishing zone will not be economically viable if it prohibits exports of the fish caught in the area.

The 24-mile baseline, meanwhile it will also allow the pole-and-line fishing operations to fish much closer to home instead of moving beyond the 50-mile radius.

The government said the amendments also in consultation with Japan who has made a request on behalf of small scale fishermen from Okinawa who traditionally fish down south into Palau’s exclusive economic zones.

All fish caught in the zone will have to be landed on Palau, but the fisheries minister can give exemptions to landing obligations.

The expected changes to the law are being introduced before the PNMS takes effect on January 1, 2020. 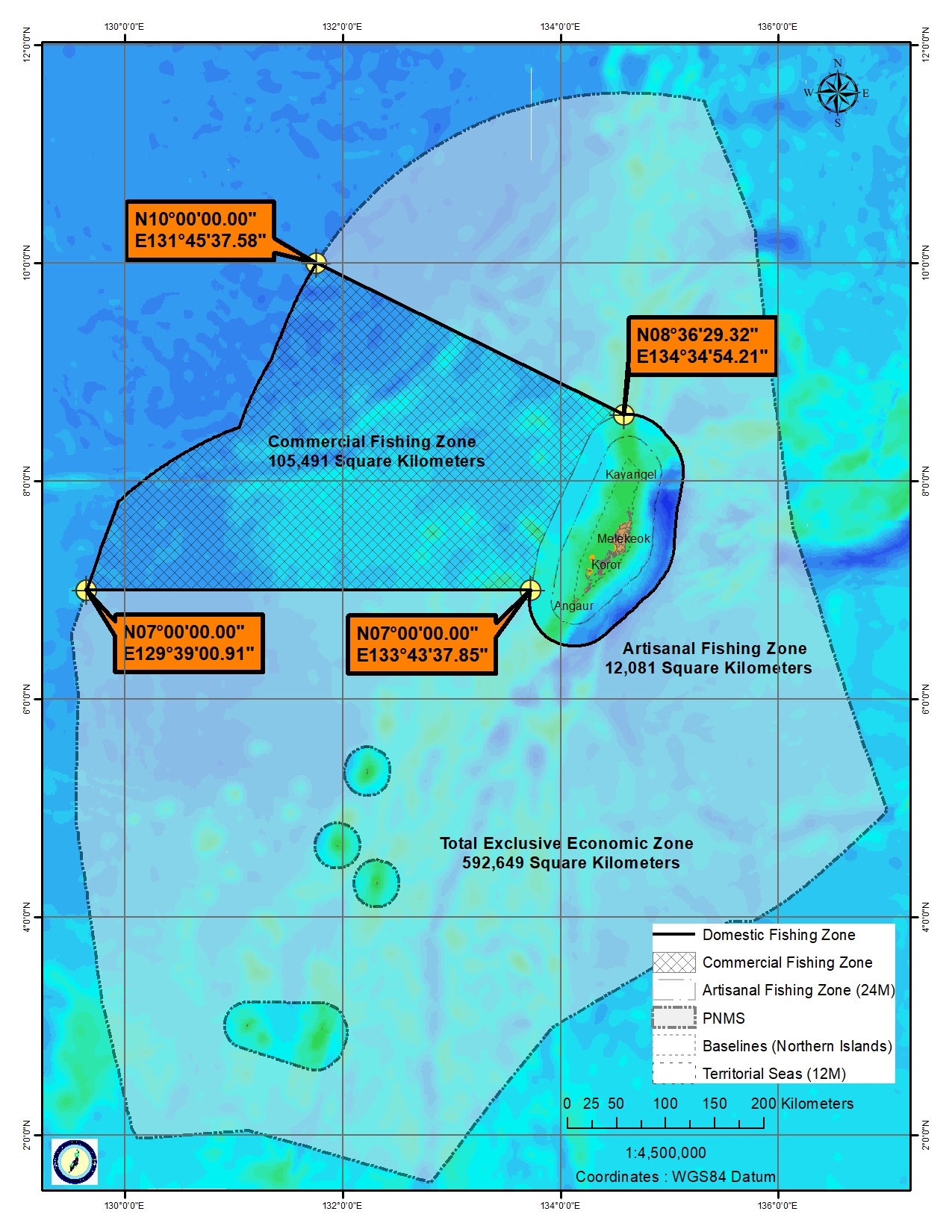 (Oct. 22, 2015) The Palau Congress today approved the Palau National Marine Sanctuary Act, which will establish one of the world's largest protected areas of ocean in the Pacific island nation's waters. President Tommy E. Remengesau Jr. said he would sign the measure into law as early as Monday as Friday is a national holiday in Palau.

"Today is a historic day for Palau, proving that a small island nation can have a big impact on the ocean," President Remengesau said.

"Island communities have been among the hardest hit by the threats facing the ocean," he continued. "Creating this sanctuary is a bold move that the people of Palau recognize as essential to our survival. We want to lead the way in restoring the health of the ocean for future generations."

Often cited as an "underwater wonder of the world," the ocean that surrounds Palau boasts remarkably healthy marine ecosystems that are home to more than 1,300 species of fish and 700 species of coral.

The legislation creating the sanctuary designates 80 percent of the nation's maritime territory as a fully protected marine reserve in which no extractive activities, such as fishing or mining, can take place. At 500,000 square kilometers (193,000 square miles), or slightly larger than the U.S. state of California, the sanctuary becomes the sixth-largest fully protected marine area in the world.

About 20 percent of Palau's waters will become a domestic fishing zone reserved for local fishermen and small-scale commercial fisheries with limited exports. This transformation of Palau's exclusive economic zone (EEZ) will take place over a five-year period, during which the number of licenses sold to foreign commercial vessels will be decreased annually. The nation's coastal waters, an area of 12 nautical miles around each of the 250 islands, will continue to be managed by Palau's 16 states.

"In its 20-year history as an independent nation, Palau has developed a remarkable conservation legacy, including creation of the world's first shark sanctuary in 2009," said Joshua S. Reichert, who leads environment initiatives at The Pew Charitable Trusts. Pew provided technical support for establishment of both the shark sanctuary and the Palau National Marine Sanctuary. "Palau's decision is an acknowledgment of the intensely close relationship between the Palauan people and the ocean that surrounds them, a relationship often expressed as 'Palau is ocean and ocean is Palau.' "

The marine sanctuary law also strengthens efforts to prevent illegal fishing by significantly tightening rules for vessels passing through Palau's waters. It requires expeditious passage of nonlicensed fishing boats through the EEZ, appropriate vessel monitoring systems (VMS) on all ships, stowage of fishing gear, and stronger reporting requirements. Establishing the sanctuary also will make it easier to identify and stop poaching because the restrictions on commercial activity simplify detection. 28 Oct 2015 - Palau's President Tommy Remengesau signed the sanctuary into law. After the full sanctuary is phased in the next five years, the remaining 20 percent of the country's waters will be reserved for fishing by local individual and small-scale commercial fisheries. The large fleets of foreign trawlers that dominate fishing throughout most of the Pacific will be banned.

President Remengesau unveiled the design for the proposed Palau National Marine Sanctuary. In October 2014, legislation was introduced in the Palau Senate and in August 2015, the Palau House announced a companion bill. The proposal is expected to advance in the next legislative session with full designation in 2016.

Palau is poised to make history by establishing the world’s first Nation-wide Marine Sanctuary – designating its entire ocean territory as a regenerative zone for sharks, whales, tuna, and countless other precious species.

This is a bold vision to reverse the oceans’ degradation from industrial fishing and to protect one of the last great places on Earth, and we know it can work. Palau declared the world’s first shark sanctuary in 2009. Today, 10 countries have followed Palau's lead, creating 4.9 million square miles of shark sanctuary. Others have followed suit with similarly important shark protections. Palau showed that it was possible. Its small spark ignited massive global action.